In the day just passed, the bond market improved by an amount that would be considered fairly strong compared to the previous session’s closing levels.  But when examined from intraday peak to trough in 10yr yields, the move was far more impressive–the biggest intraday gainer since August 23rd (Fed’s Jackson Hole day).  The culprit was a staggeringly weak ISM Manufacturing report (weakest since 2009), which hit a bond market that had moved somewhat abruptly higher in yield overnight.  The resulting 180° was the most logical result.

In the day ahead, the bond market will decide what yesterday means in the context of the current trend.  Until yesterday morning, the prevailing trend had been sideways and narrower (aka, a consolidation) for more than a week.  In fact, we could look all the way back to the lows (1.44%) at the beginning of September as the start of the consolidation trend, with the 1.90% highs on Friday the 13th marking the top.  With those levels in mind, it’s interesting and perhaps even informative to consider that 1.67% (halfway between 1.90 and 1.44) emerged as one of the most important pivot points of the past 2 weeks.

Yields bounced hard on 1.67% back on September 23rd before briefly attempting a break the following day.  That break was rejected and the consolidation continued.  Early in the overnight session yesterday morning, yields bounced at 1.67% yet again before rising all the way to 1.75+.  The ISM-inspired rally prompted a big break below 1.67%–big enough that yields were able to return and use it as a ceiling before continuing down to the next pivot point this morning (1.62%).  The net effect is the transformation of the sideways consolidation into something more downwardly sloped. 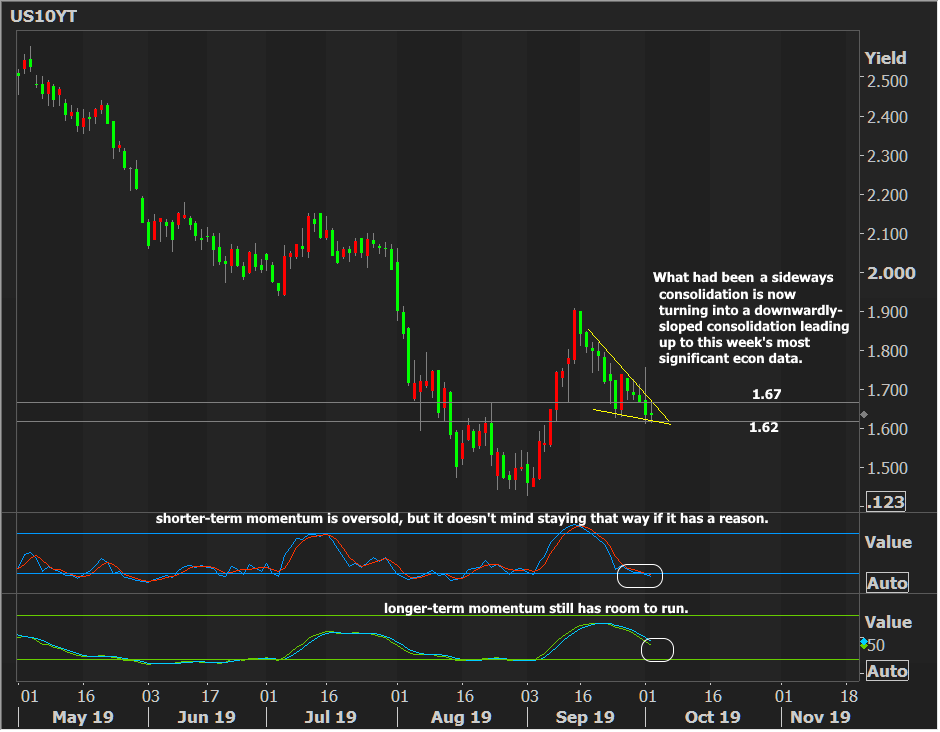 All this technical analysis is well and good, but the fact remains that a big, positive data surprise could still easily challenge the overhead support lines, be they the yellow consolidation line or the still-important ceiling at 1.67%.  Today’s data isn’t up to the task, but tomorrow’s may be.  If bonds decide to sell-off before then, it would be tempting to read some significance into that move, but I think yesterday’s ISM data was weak enough that–in the absence of any new, strong econ data–any significant increase in yields is better seen as bond buyers taking a breath and getting ready for more buying.